Leif Fuhrmann Hansen is just another guy with a passion for Minis. However, for the last few years he has been working on a special project: a Mini with a motorcycle engine mounted in the rear. 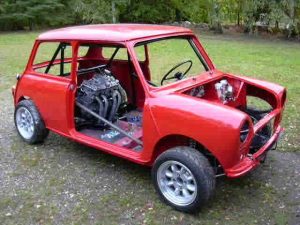 The whole idea began when Leif approached his friend who had a damaged Honda CBR 1000 motorcycle and was able to buy the engine and its components from him. Originally plans were just “for fun” as in Denmark it is very difficult to get any specially modified vehicles through Syn (the Danish equivalent of a United Kingdom MOT) and approved for road use. 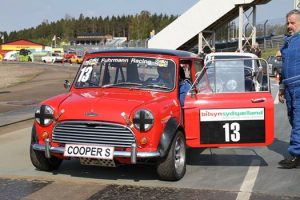 Basically the car is built under Hot Rod principles with the chassis as the construction that bares the different car components – engine and brakes etc. By building this way it is the chassis that is under scrutiny and requires approval to be road legal. 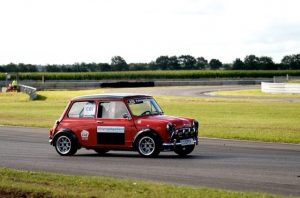 After the build, which is no easy project, included Volkswagen Golf brakes and driveshafts from a Ford Escort, Leif had arranged a meeting to have an engineer’s report to describe the various specifications. After both Leif driver/engineer co-pilot & engineer driver/Leif co-driver the Mini was fully tested by both owner and engineer.

And this is when the two year process began. 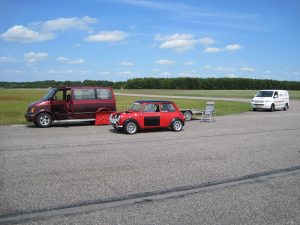 There are very few approved engineers in Denmark for this type of work and they ain’t cheap!, so this was also the time that Leif committed himself financially to an unknown project with an unknown outcome and time frame. Nobody knew what it was going to cost or how long it would take or if it was at all possible to get his MC Mini registered.

I spoke to Leif at the Veteran Car Fair in Fredericia in October 2016 where his car was on display.

He said “There have been a lot of meetings with the engineer and at one point I was reconsidering the project because of the sheer cost but with the support of my wife we pursued our goal of the first MC Mini in Denmark – registered and approved for road use. We are so happy that we made it and are now proud owners of a unique vehicle. I’m quite happy to help others with the project but the engineer’s reports and the mountains of other paper work are mine only.” 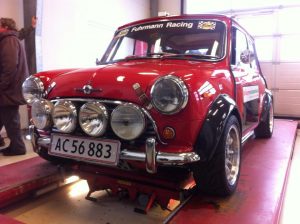 In Denmark any similar project would have to go through the same process no matter what. So the paper work is unique for Leif’s MC Mini and he is understandably protective of the documents.

Personally I take my hat off to Leif for going through the momentous task of approving a “one of a kind” car in Denmark.

Leif’s MC Mini can be seen at various shows and he is always happy to talk about it.